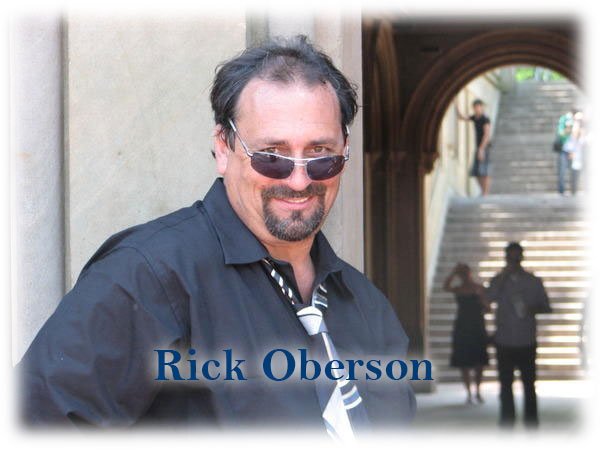 Rick Oberson has had a ‘life-long love-affair’ with all styles of music; one that started at the robust young age of three. Mostly self-taught though he’s had some formal training on classical guitar, piano and voice…to music theory, ear-training, and music history.

The multi-talented “Mr.TFO” has played mainly on the Metro NJ /NY club and concert scene as well as performing for a couple of years with Legendary 60’s Rock & Roller Joey Dee & The Starliters. He has shared the stage with Joey, Dave Brigati, Eddie Brigati, ( Young Rascals ), Tommy Mara & The Crests, The Shirelles, The Duprees, Chubby Checker, Leslie Gore, gigged with Bernard Purdie, and Jay & the Americans.

He’s appeared as a guest on several CD’S singing and playing  blues/dance/funk/jazz/r&b, prog rock, and rock and roll.

Rick’s musical-forays have drawn on his keen ears, memory, & feel, all of which contributed to the seemingly endless, extensive repertoire of songs…a collection that has taken a “lifetime” to amass and is constantly growing.

In 2004 through good friend and guitarist Ray Longchamp, Rick was asked to join The Kootz, where he met and teamed up with artist Gregg Hollister. When the pair realized they shared many common musical tastes, each with a different approach, The Flying Obersons were formed first as a Duo. The Trio, Quartet, and 7 piece band with the addition of The Bitchin’ Brass Horns rounded out the musical repertoire drawing on many talented friends through the years to fill in on many gigs. A lifelong resident of New Jersey, he also embraces a very simple formula for a life of contentment: “Family, Music, Golf…Love & Laughter!”